sign up
Home ⁄ Blog ⁄ The new PHP 8.0 (alpha) release has been added to the Control Panel

The new PHP 8.0 (alpha) release has been added to the Control Panel 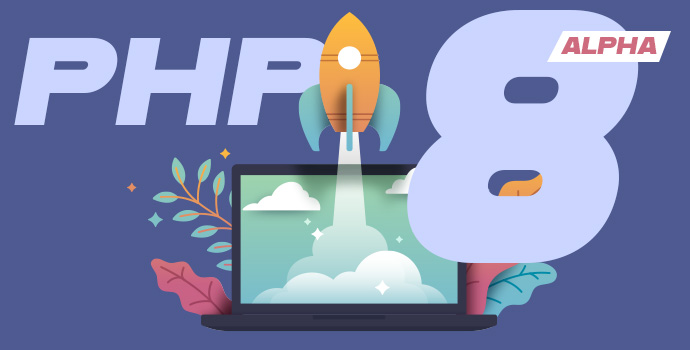 Recently, the PHP team has announced the first testing release of PHP 8.0.0, Alpha.

This has started the release cycle of PHP 8.0 which is expected to make its official, in-production debut by the end of the year.

PHP 8.0 represents a new major version that will introduce some breaking changes, as well as a host of powerful features and performance improvements.

The new major PHP version and the advancements it will introduce are a great way for the global PHP community to celebrate the 25th anniversary of the programming language this year.

What are the key features of PHP 8.0?

Here is a look at some of the most promising additions that should improve the overall performance and reliability of PHP.

The Just-in-time (JIT) compiler is the most anticipated feature coming with PHP 8.

It is aiming for a change to the way the PHP code is interpreted which will bring significant performance improvements to the table.

With JIT, PHP will be able to develop language-specific features.

It will also allow the language to be used for CPU-intensive tasks like, for example, Machine Learning, Game Development or User Interface development.

PHP 8.0 also comes with support for Union Types. This means that developers will be able to declare more than one type for properties, parameters, and return types, which is not possible in previous PHP versions.

Attributes, also known as annotations in other languages, will also be a new feature coming with PHP 8.

You can find a full list of the features coming with 8.0 as well as some code examples here.

As PHP 8 is still under active development, we could see several changes before the final release.

How to enable PHP 8 from your Control Panel?

The new PHP 8.0 alpha version is accessible from the Advanced section of the Web Hosting Control Panel.

Once in, just click on the PHP settings tab and then select the version from the Account PHP Version menu:

If you want to enable PHP 8.0 for a specific host, then you should do that from the “PHP per Host” tab:

Please keep in mind that this is not an in-production version so it should be used for testing purposes only.

How to make your site location-relevant with geo-targeting